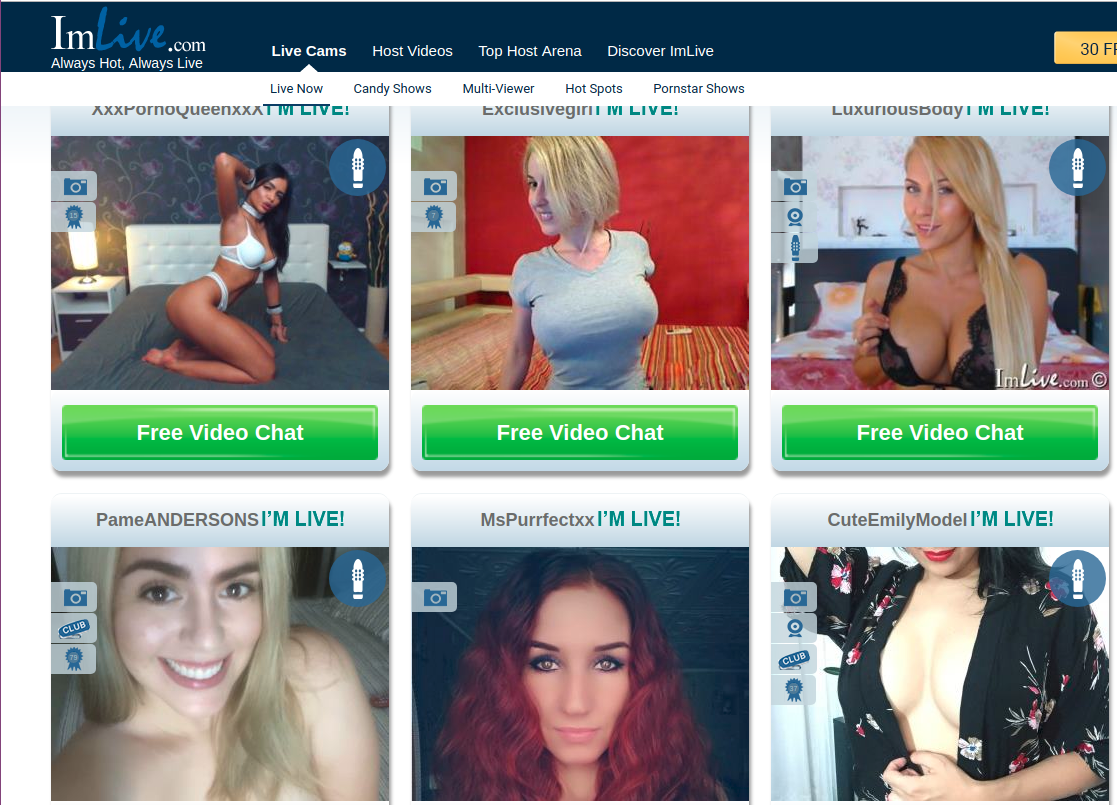 What sets us apart is our focus on researching sex cam sites from the perspective of the real costs to the end users. In order to find the best deals and cheap live webcam shows you first must be able to tell what each site costs. Right?

First we extracted the method that Imlive has users pay for shows, then took a flat dollar amount consisting of $1,000.00 U.S. dollars and used the funds at Imlive applying the costs to a random sample of models. As a result we were able to able to determine the real average costs per minute for live sex cam shows at Imlive. No other methods are based on science unless they employ some similar methodology. Likewise, we used the same process for all of the 7  most used sex cam sites in the world.

SHORTCUT: The average cost per minute after you do the math here is $2.05 at Imlive.com

Imlive reviews, as far as price per minute.

We think that the typical person that uses live webcams sites should be able to look at all the adult live webcam sites side-by-side and then be able to actually tell what the cost per minute is for live sex cam shows at that site. While the price for sex cam shows at Imlive are all clearly marked, each sex cam site has a different way to deliver shows. In some cases the site will sell you packs, in other cases it’s a flat fee for all performers, or it’s called a credit, and yet in other cases you get tokens that are worth different amounts per minute depending on which sex cams model you choose. Since it’s never REALLY EASY TO BE ABLE TO COMPARE APPLES TO APPLES, we knew others would find our comparisons useful. Partially because not everyone has an extra $1000.00 to spend on all sites. However, in order to really see how the law of averages applies you must have a large chunk of money to get a fair outcome.  The whole point is this; many people are looking for cheap adult webcam sites and places where they can just spend a few bucks and get a fair value. By publishing our findings you can have the best of both worlds. Meaning that for big spenders of adult webcam sites you can see where over time you can save the most money. Likewise, those of you who rarely use sex cam sites you too can learn where the best deals are by using the comparison table. There you can find the way that Imlive charges you and what that really means as far as the price per minute; a standard metric that is much easier to understand! At the summary of the cost analysis which was last updated in October 2018 you can see ImLive.com now comes in as the lowest priced adult webcam site as we approach 2019.

Making sense of the costs at Imlive.com

Again, due to the commitment of  time necessary for others to come up with this information; as far as doing the math to determine the average costs of using each adult cam site, especially for those who plan to use sites like Imlive for a longer time frame; it seemed like sharing what each of the top sex cam sites cost would be something of use to many. When we took a random sampling of models at this site, than spent that flat sum of money it made it very transparent how much time we really got with cam models for our money. If you did this for each of the top sex cam sites, before long it would be clear which adult webcam sites cost the least. It’s simply a matter of doing the math and taking the time.

Outcome of our study on live webcam show prices for Imlive

First things first, let’s talk about how we picked the top 7 sex cams sites to include in our study on just the real costs of adult webcam sites. We made these selections in a very fair and impartial manner based on a 3rd party that provides traffic analytics. The Imlive reviews, based on costs and prices were included because this site is a top visited site according to Alexa. You don’t get millions of users if you are running a scam, hence there is little question that it’s a popular site. The real question was getting down to the real costs.

Where Imlive.com ranks as far as the lowest priced adult cam sites

Just to review, the site we are discussing is just Imlive, but since we already know that it is a large and mainstream adult webcam site, the next question becomes where does Imlive.com rank as far as the lowest priced adult webcams? Since we have chosen just the top sites as noted above, the last step was taking the outcomes of the averages for the flat sum we spent on all the top sex cam sites, then comparing it to the outcome of the other lowest priced adult webcam sites.

REVIEW CONCLUSION: The costs for sex webcam shows on Imlive are $2.05 if you take the per minute average and divide that by the credits packages based on our law of averages math. Accordingly the cost rank across the adult webcams industry is 1st and cheapest sex cam site leading our top 7 adult webcams websites.

That being said, there are really no other sites that offer cheaper sex cam shows than this one. Find out on the comparison table where to find the cheapest sex cams or visit this site Imlive here.

Why? Because it's business! Saving money on live webcam sites for adults makes as much sense as not spending more than necessary on any other kind of entertainment. Save money with our detailed breakdowns of costs and prices for all the top sex cam sites.  As we detailed throughout our site we did the math based on the same metrics (price-per-minute) for all sex cam sites. Find the cheap adult webcam shows reviews here.

Also find the latest tips on the lowest priced adult cam shows at our blog here at LowestPricedAdultCams.com. Lastly, get reviews on the top 7 cheap sex cam sites here.

Recent Sites we did Prices & Cost Breakdowns on